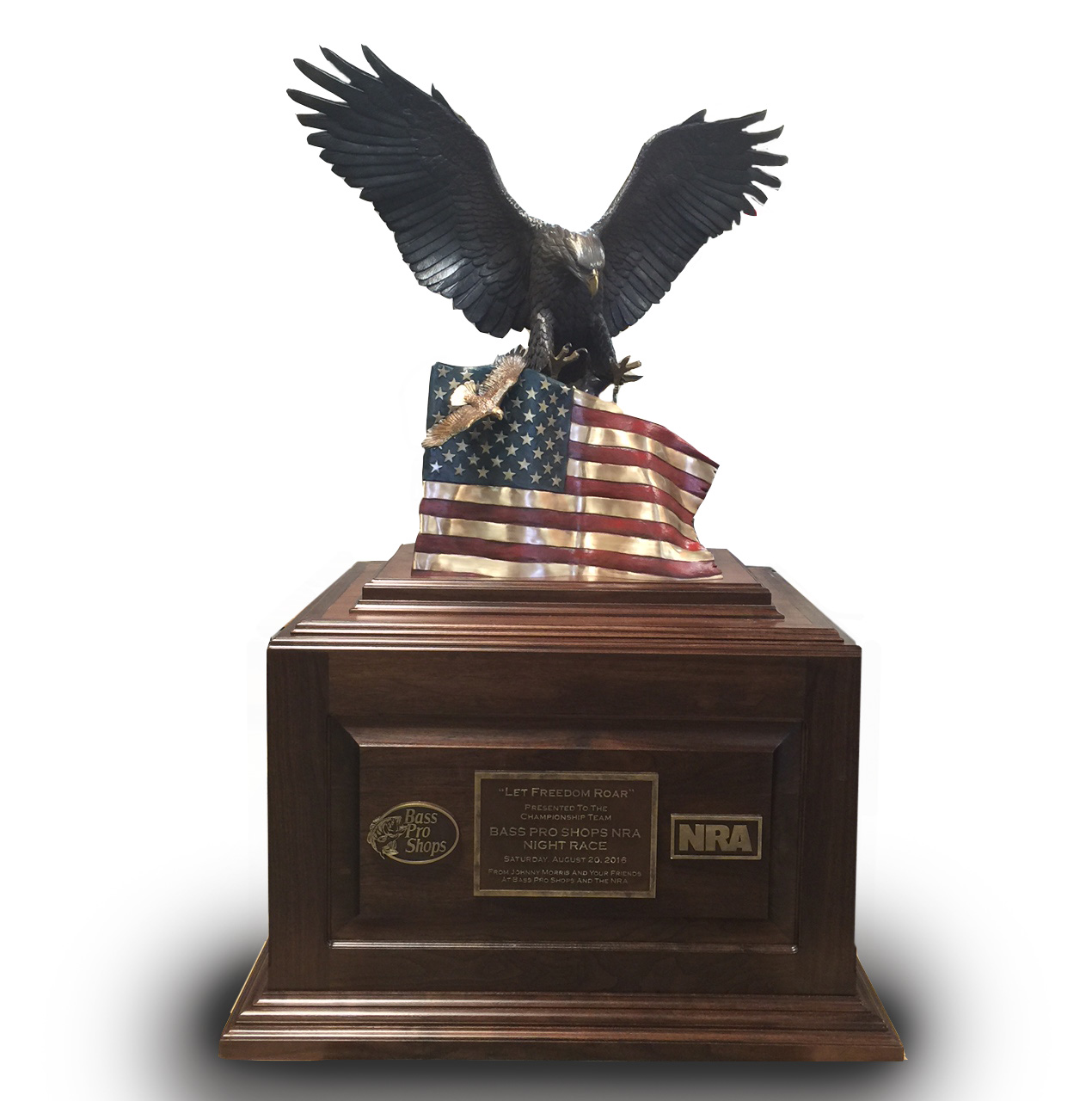 The striking trophy contains a dramatic bald eagle standing 36 inches tall with a 48-inch wingspan poised to lift an 18-inch-tall American flag with its talons. The two sculptures rest on a handsome walnut base with plaques honoring the winner. Standing nearly six feet tall and weighing 300 pounds, the huge trophy will greet the race winner in victory lane.

Before a winner can emerge, however, drivers will need to first endure one of the most iconic and relentless competitions in motorsports. The race will begin as 84 general managers from Bass Pro Shops locations throughout the country will stand together in Bristol and deliver the command, “Drivers start your engines!” to kick off America’s night race.

“Bass Pro Shops is enormously proud to celebrate American freedom and the liberties we are so blessed to have in this country,” said Bass Pro Shops founder/CEO Johnny Morris. “America is an incredible nation, in part, because of our rich outdoor heritage and we are excited to salute the hunters, anglers and sportsmen who contribute to ongoing wildlife conservation efforts so all Americans can enjoy abundant wildlife and outdoor spaces.”


Both Bass Pro Shops and the NRA, through its Hunting and Wildlife Conservation Committee, are deeply committed to conserving the outdoors and recognize the need to raise awareness about the contributions of America’s hunters and sporting men and women. For example, hunters and anglers are the largest contributors to conservation in the United States, accounting for more than 75 percent of the funds provided to state conservation agencies. Sportsmen have contributed more than $7.2 billion to a variety of wildlife and habitat conservation programs since 1937 through hunting licenses and excise taxes on outdoor gear.

The partnership builds on existing collaborations to educate and inspire the public about conservation efforts. Bass Pro Shops’ flagship store in Springfield, Mo. is home to the NRA National Sporting Arms Museum, a free educational gallery home to nearly one thousand artifacts telling the story of American icons such as Lewis and Clark and Theodore Roosevelt. The educational reach will expand significantly with the completion of Wonders of Wildlife National Museum and Aquarium, a 300,000-square foot world-class conservation attraction dedicated to celebrating the role of hunters, anglers and sportsmen in conserving wildlife for future generations.

About National Riffle Association (NRA)
Established in 1871, the National Rifle Association is America's oldest civil rights and sportsmen's group. More than five million members strong, NRA continues to uphold the Second Amendment and advocates enforcement of existing laws against violent offenders to reduce crime. The Association remains the nation's leader in firearm education and training for law-abiding gun owners, law enforcement and the armed services. Be sure to follow the NRA on Facebook at NRA on Facebook and Twitter @NRA.